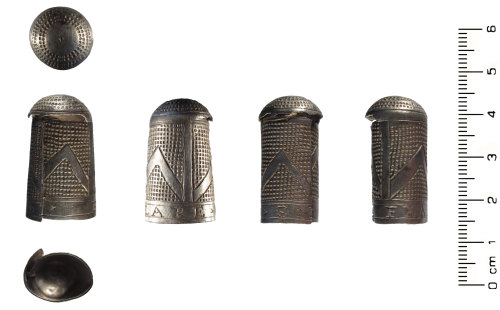 Circumstances of discovery: Whilst searching with a metal detector

A composite thimble formed of rolled sheet silver and distorted by movement within the plough soil. The dome was originally made separately and soldered into place. There is no rolled rim on the lower edge of the thimble; instead it rises with near vertical sides which taper towards the dome The lower part of the thimble is decorated with a broad plain band which is inscribed with a motto and bordered above and below by circumferential grooves. The inscription reads: FEARE GOD in block capitals with distinct angular serifs. The elements of the inscription are separated by small saltire crosses and the marks of the graver are clearly visible. Above this banded inscription are three rectangular panels of lattice grid through which passes an inverted V shaped band forming a zig-zag pattern. The lattice if formed using a square shaped punch. The dome of the thimble is similarly decorated with the same punch although the design is arranged in two double rows arranged around the external edge with a single square punch at the mid-point. The inside of the thimble is plain and polished - with a punched makers mark on one edge being a capital R within a square shaped cartouche. The external faces are well preserved with little damage through abrasion or corrosion; the thimble has been crushed by movement within the soil and both the original construction seams (vertical and circumferential) have split open.

The thimble can be dated to the 17th century on the basis of style, spelling and the form of the seriffed capital letters, a form popular in the 1650s. The decorative design is paralleled with examples from Tharston and Hapton, Norfolk (Barch 2014) and Canons Ashby, Northamptonshire (Cassidy: 2011) The motto can be paralleled against other later 17th century silver artefacts including thimbles (McLean, 2007 and Marsden 2014) and posy rings (Evans 1931 and Williams 2016). It is also noted that: "thimbles with waffle-shaped indentations and religious mottoes are typical of the Commonwealth period (AD 1649-1660). Small objects such as rings and thimbles often bore improving mottoes such as 'Feare God', 'Labour is profitable' or as this example has 'Worcke is profitable' Rachel Church: Curator Sculpture, Metalwork, Ceramics and Glass Department Victoria and Albert Museum (referenced within Bolton, 2011). The style of lettering, being Roman capitals and the spelling are typical of the 17th century. Dora Thornton has noted that silver thimbles, increasingly used by nobility and gentry, were often donated by women on the Parliamentary side to be melted down during the Civil War (2006: 162-165). Thimbles of this date, although imported from Holland into England in large numbers (145,000 in one year), are now rare. (Holmes, 1976, p.15, fig.6d)

This find was over 300 years old at the time of finding and composed of more than 10% precious metal, and therefore should be considered Treasure under the terms of the Treasure Act 1996

Recording Institution: HESH
Created: 4 years ago
Updated: About one year ago