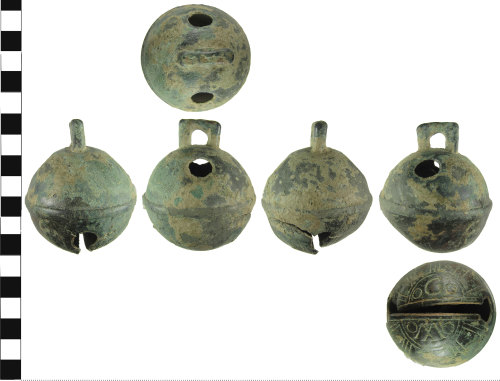 A cast copper-alloy Post Medieval (c. 1700-1850) rumbler or cow bell. The bell is complete and retains the pea. It is spherical with a square shaped attachment loop on the top of one of the hemispheres, in between two sounding holes. The upper and lower hemispheres meet at the centre where a raised ridge encircling the item is seen.
The lower hemisphere features engraved decoration. There is an engraved circle, bisected by the sounding slit on the bottom of the bell, and within each section of the circle there are makers mark initials with pellets either side. The initials are 'W' and 'G'. Around the outside of the engraved circle containing the initials are sets of five engraved lines (three in each group), extending toward the central ridge of the bell, and forming a 'sunburst' style pattern. It is likely that these were originally the centres of engraved petal shapes, which was a popular motif on bells on this kind, though which have now worn away.

The patina is dark green to brown in some places. There is some damage caused by crushing on the lower hemisphere.

The initials likely refer to the maker William Gwynn, who was active in Aldbourne from 1770-1813.

An almost identical bell has been recorded previously on the PAS database - KENT-81FFFE. Other examples of bells likely from the same maker on the database include: IOW-A84463, DENO-AFE115, DENO-CC6A81, BERK-88AD9C