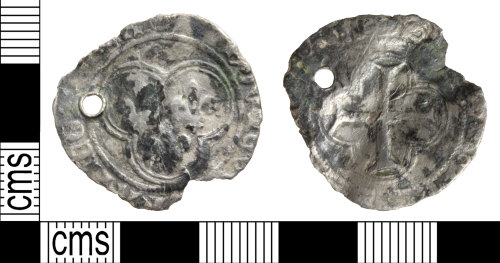 The coin has been pierced, 3.48mm in diameter, to the left of the tressure, and is ridged on the obverse but not on the reverse.

The coin is incompelete, chipped around much of the edge with some areas of inscription no longer surviving.

Single coins do not normally come under Treasure Act 1996 but those which have been modified, possibly converting them from a coin into an object, can be considered as such, and this may include pierced coins. Pierced coins dating pre-1180AD are automatically considered as Treasure but post-1180AD we have to apply more scrutiny because coins were pierced in order to take them out of circulation as currency as well as for modification into objects such as pendants. In this case the piercing although a regular round shape is not oriented on the design of either obverse or reverse and has not been neatened leaving a ridge around the hole on one side. As such, rather than modification for conversion of the coin into a pendant or other form of jewellery it is possible the coin was pierced to mark it as outside of the circulating currency and would not constitute a Treasure find.

Further infomation on pierced coins and the Treasure Act can be found at: https://finds.org.uk/treasure/advice/piercedcoins

Find number: WILT-3A1B99
Object type: COIN
Broadperiod: POST MEDIEVAL
A silver Post Medieval threepence of Charles I dating to the period AD 1638-1642. This coin is pierced at 12 o' clock on the obverse. The per…
Workflow: Awaiting validation