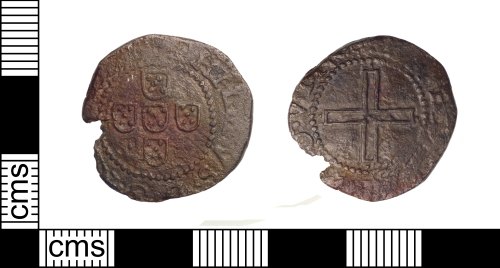 The five shields on the obverse of this coin also feature on the coat of arms of Portugal where they are popularly referred to as the Five Quinas or simply the Quinas (quinas being the Portuguese term for quincunx; the term used to describe the layout of the shields - like the number five on a die). The five pellets in each shield represent coins or bezants (bezant is a medieval term for a gold coin) symbolising the right of the monarch to issue currency. More information may be found at: https://en.wikipedia.org/wiki/Coat_of_arms_of_Portugal

Note from Standard Catalogue of World Coins. 1601-1700, Krause. C.L and Mishler. C. The coins of Philip II and Philip III are so similar it is difficult to provide an absolute attribution. Portuguese authorities tend to rely on legend variations, but these are often lacking in certainty. The name 'Phillipvs' is attributed to both rulers, although it is likely that 'Philipvs' is Philip III only.