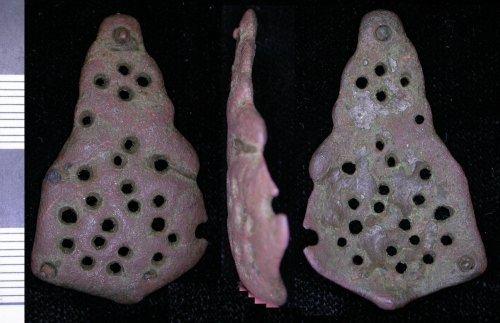 Anglo-Scandinavian Copper alloy mount, 39mm long, 24mm wide and 3mm thick. The object weighs 8.04 grams and has a reddish brown patina. The object is roughly triangular and curves slightly from the centre. There is a rivet hole in each corner, two still have rivets attached. The surface is decorated with what appear to be random drilled holes about 2mm in diameter. Around its surface are traces of a raised rounded band which criss-crosses the surface and is more visible around the edge. This may be a representation of an entwining serpent? The reverse is plain and there is no sign of a flange. The object appears to be a perfect match for a Northern(?) french example in Williams' Late saxon Stirrup mounts (Class B, no Type; p. 106; ref. C23), though its attachment means appear to be more similar to mounts in the Urnes style rather than the stirrup-strap mounts with iron rivets.

This is only the second mount of this type recorded in England and it is the first with a location, The other example belongs to the British Museum and is unprovenanced.