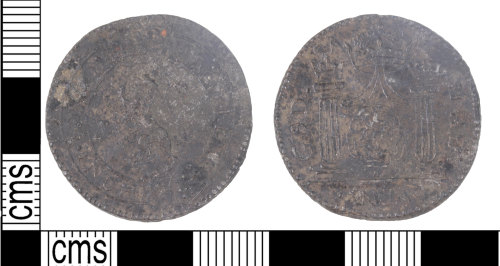 The token's detail is sharp, with only a small amoutn of obverse detail obscured by an encrusting substances.The token is a mottled dark brown colour.

This type of token is similar to those Lyon tokens associated with the order of the garter and Henri III of France, which display the French Lis shield reverse. No clear parallel is seen on the database. This example seems to be a bit of a hybrid of the Lis shield Lyon token (a number of which exist on the database @ LON-B75695, LON-35C284 and LON-D7B215) and the medalet/token North 2062 (some examples of these @KENT-4BAE62), which has an obverse which also displays the legend 'GOD SAVE THE QVENE'. All these tokens and madlets seem to be associated with London as do a number of possibly related tokens or 'medallets' with suggested association with political events of the reign of Elizabeth I, a number of which are discussed by JJ North in English Hammered Coinage Volume 2: Edward to Charles II 1272-1662 (1991, 140).