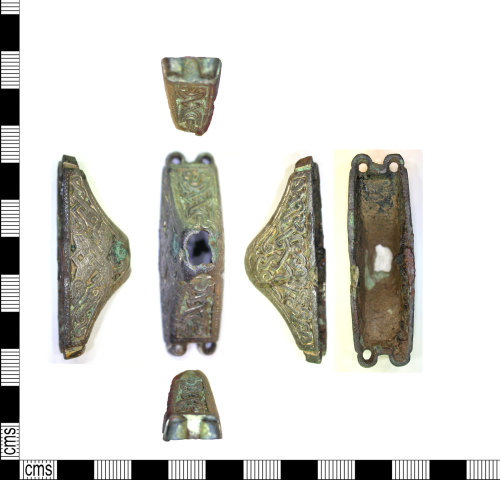 The pommel cap is pyramidal in form, a shape widely referred to as 'cocked hat' in academic literature. It has two broad faces (front and back) and two 'shoulders' which curve downwards from the peak to a straight terminal. Each terminal has two projecting rivet-tubes (4mm high and 5mm diameter), three empty and one with a silver dome-headed rivet in situ. The pommel cap is hollow and has a patch of iron concretion near the base on the inside of one broad face, perhaps from the iron tang of the sword blade. Patches of copper-alloy corrosion are also visible inside, possibly indicating that the pommel cap originally had a copper-alloy core. The peak of the pommel cap is missing in a roughly rectangular shape, perhaps from a lost setting or through damage.

The two shoulders of the pommel cap both decorated with the same design, consisting of an interlaced knot with a T-shaped scroll at each end, resembling a stylised human mask with long nose. These motifs also have incised median lines inlaid with niello.

Remains of gilding suggest that the object was originally gilded all over, although this now survives mainly in the recessed parts of the pommel cap, particularly between the rivet-tubes at each terminal. Patches of copper-alloy corrosion are visible on parts of the outer surface, perhaps from a copper-alloy core or contact with another object. The broad face with interlacing design has a deep vertical scratch towards the left hand side, from top to bottom. The object is noticeably worn.

Addenda - The object has now been conserved and traces of a green substance, similar to that found in 9 examples in the Staffordshire hoard has been identified. The pommel has been for analysis with the following conclusions.

The analysis suggests that it was indeed an inlay, with the top layers having a spectrum similar to corroded glass with silica, alumina, potash, lime and phosphorus represented, with some copper and
tin. In places it appears that the inlay had extended over an edge, which suggests that it was inlaid in a viscous state, suggesting some form of enamel, though further work is needed. This object provides a useful link to the processes involved in the construction of some of the Staffordshire hoard pommels and presents the possibililty that both were constructed using the same techniques, although there are some differences which will require further research.

The 'cocked hat' form of pommel developed in the sixth century and continued in use into the seventh, its form changing over time. The Scalford pommel cap is similar to Menghin's (1983) Typ Beckum-Vallstenarum (2e), with high rivet-tubes, smooth sides and usually rich decoration (Menghin 1983, pp. 315ff). A number of examples are decorated with interlacing strands, while the motif of addorsed beasts is similar to that on examples from the Staffordshire Hoard and Crundale in Kent (British Museum, 1894,1103.1.a).

As the pommel cap is made of at least 10% silver and is over 300 years old, it constitutes potential Treasure under The Treasure Act 1996.

Subsequent action after recording: Acquired by museum after being declared Treasure