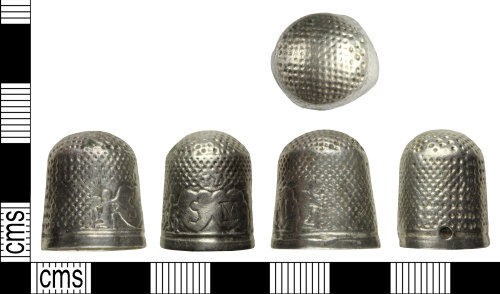 The thimble has a circular shape, slightly squashed, smooth and undecorated rim. Just above the rim, on one side of the thimble, is decorated with a small panel containing two hearts, inscribed S M. Both hearts are supported by putti. Above the hearts are the maker's initials: I R. The apex is convex and the surface of the object is completely covered with several horizontal rows of punches.

An almost identical thimble is recorded under the Treasure Act on PAS database IOW-7E8237, dating to 17th century.

Silver thimbles were used increasingly by the European nobility and gentry during the 17th Century but surviving examples are rare, given that thimbles were much used and, when worn, were likely to have been melted down for their bullion value. In England, silver thimbles are documented as having been donated by women on the Parliamentary side to be melted down during the Civil War. Even later 17th Century English silver thimbles are rare, with few pieces in the national collections in the British Museum and the Museum of London.