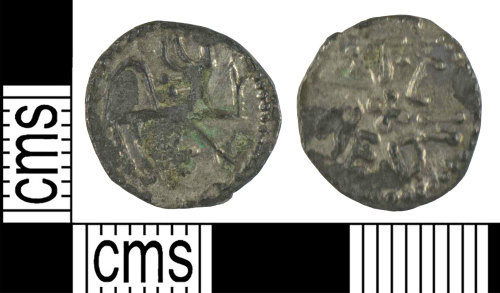 Sceattas of Alchred are uncommon. 23 are listed by EMC for which two (2008.088 and 2012.0041) also have a similar retrograde inscription but neither are die duplicates for this coin although are for each other. The silver content of Northumbrian sceattas declines greatly and it appears that this is simply base silver rather than contemporary counterfeit striking on a base core which was then plated (as is seen on a substantial number of sceattas). EMC2012.0041 also shows some evidence for corrosion.

A parallel for this coin has been recorded as YORYM-428AF6.

This is a find of note and has been designated: Regional importance