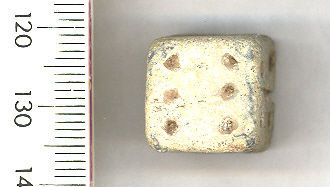 A slightly uneven cast lead die of three-dimensional cuboid shape (14.4mm x 14.5mm; weight: 30.92g). Each side shows a number from 1-6 that have been incised as single dots to a depth of approximately 1mm. There is one deep cut/ damage mark on the side with 5 dots. The die is in a slightly worn but fair condition.

It is difficult to date dice as they appear in all periods, but Mills suggests that the more conventional Roman dice were made of bone or lead (see Mills, 'Celtic & Roman Artefacts', 2000, page 113, Ref no RB356). However, many examples of excavated dice from Roman sites such as Colchester, South Shields & Richborough, Kent have only yielded bone dice with ring and dot patterning on them to represent the numbers. Mills continues to note that Roman dice found in Britain can be poorly made and often have opposite sides that do not add up to 7 (page 113-4). They seems to be mostly the case with this example. 6 is opposite 1, but the other numbers do not add up. In his paper titled 'Dice' for the Finds Research Group 700-1700 datasheets, Geoff Egan does note that lead dice are very rare in the Early Medieval/ Medieval periods. Therefore, this example may probably date to the Roman period.

Find number: SWYOR-019D8C
Object type: DIE
Broadperiod: MEDIEVAL
A cast lead gamiing die of probable Medieval date, AD 1200 - 1500. The object is cuboid in shape with each of the 6 sides around the same siz…
Workflow: Awaiting validation

Find number: WMID-A37831
Object type: DIE
Broadperiod: ROMAN
A cast lead die with a non-regular layout. The die is sub-cuboid, with material missing from the corners, possibly from use. The die has inc…
Workflow: Awaiting validation