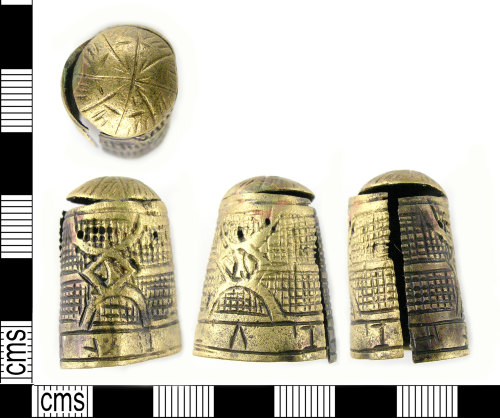 A post medieval copper alloy thimble dating to the mid 17th century. This thimble is of two-part construction where the body and the peak have been made from two separate piece of copper alloy which were then soldered together. The lines of solder can be seen around the edge of the peak and there is a vertical seam along the body of the thimble. The seams have broken open again and the peak is now only held onto the body by two small pieces of solder.The thimble is decorated with a strapwork design and the indentations are created by an stamped square grid with letteringin capitals below. The lettering appears to read "A I H - E" the E is in retrograde and the other letters are poorly formed. On other examples this lettering forms a motto but this appears to be illegible.The strapwork design forms three parallel lines running around the body of the thimble with a more ornate pattern repeated on opposing sides. The pattern comprises two abutting semi-circles with lozenge-shape in between. There appears to be a motif within the lozenge but the detail is unclear. The peak is also decorated with a stamped geometricpattern consisting of a line that bisects the peak and on either side of that line there are three radiating lines and then a border of smaller diagonal lines. There is no evidence of a maker's mark.

Similar thimbles are illustrated in McConnel (1999:24) and are dated to the mid-17th century and are of English manufacture. The construction, shape and decoration are very similar. A similar example but in silver is also recorded on the PAS database: LON-D4CA92, and one in copper alloy -LON-6F9633 although it has triangular indentations instead of the square grid and themotto WORK A PASE.