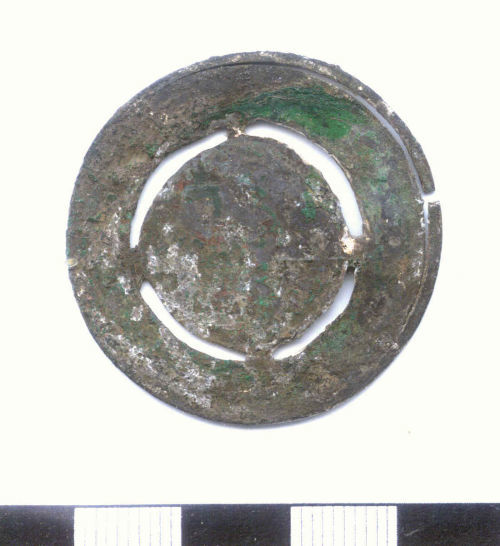 A silver Post-Medieval coin that has been altered into a dress accessory or mount.

A silver frame, or rim, 1.4mm thick appears to be seperately attached to the outer edge of the coin, and is broken and coming away from the coin edge. Where the edge of the coin is revealed, some file marks are visible, suggesting alterations to the coin to make it fit into and adhere to the rim.

The reverse shows a shield bearing the Royal arms of England, but the detail is very worn. Its size, flat topped shield on the reverse and POSVI legend on the reverse suggest this is a possible Crown of Edward VI or, more likley, a Shilling of Elizabeth I. It is the reverse that has inspired the modification of the coin, with the metal being removed from the inner circle of the coin, leaving the arms of the cross intact resulting in four perforations around the coin.

The obverse of the coin is illegible due to detail being obscured and affected by adhesive used to attach this mount to a backing plate.

This item is more than 300 years old and composed of more than 10% precious metal. It is no longer a single coin, as it has been modified into an object. It therefore should be considered Treasure under the terms of the Treasure Act 1996.

The record description, and identification of what period coin this is, may change once it has been through the treasure process and analysed in more detail by the Medieval coin curator.

Find number: WILT-3A1B99
Object type: COIN
Broadperiod: POST MEDIEVAL
A silver Post Medieval threepence of Charles I dating to the period AD 1638-1642. This coin is pierced at 12 o' clock on the obverse. The per…
Workflow: Awaiting validation