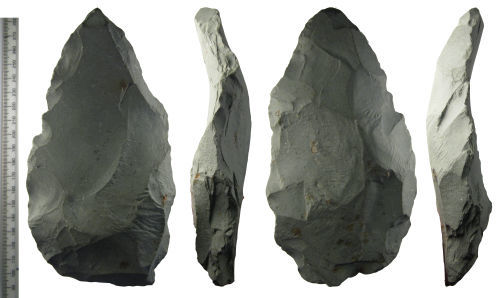 A stone axehead roughout made from Langdale epidotized tuff stone and dating from the Neolithic Period, 4000 BC - 2350 BC. The roughout is ovoid in plan and S-shaped in profile, with a sub-rectangular section.

The roughout has knapped edges and it is roughly axe-shaped, but it was not completed. The faces are still bulbous and the surface is rough: is has not been polished. Work was discontinued and the roughout was discarded for unknown reasons.

The roughout can be compared to LANCUM-5856A2 and LANCUM-799F15 which note that tuff is formed from compressed volcanic ash and has a fine grained composition with infrequent crystalline inclusions. Tuff is found in Britain and Ireland in a band that runs down the Irish Sea from the Lake District (the Langdale's source Group VI), County Antrim (Ireland), through North Wales (Graig Lwyd Group VII), and into Cornwall and Devon (Groups XVI and IV respectively). This roughout was recovered from Langdale, but recent work has shown that as well as petrological Group VI material, the parent rock at Langdale also includes Group XI material, and material similar to Group VIII (Bradley and Edmonds, 1993, 71 - 72). Volcanic tuff is similar to flint in that it can be finely worked, ground and polished to form a variety of tools; however axes are the most common.

Broad period: NEOLITHIC
Period from: NEOLITHIC
Date from: Circa 4000 BC
Date to: Circa 2350 BC

Find number: SWYOR-E70566
Object type: AXEHEAD ROUGHOUT
Broadperiod: NEOLITHIC
A stone axehead roughout made from Langdale epidotized tuff stone and dating from the Neolithic Period, 4000 BC - 2350 BC. The roughout is ov…
Workflow: Published