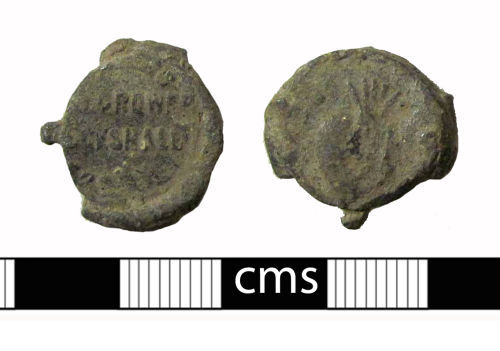 An incomplete lead alloy bag seal dating to the late post-medieval to modern period. The seal broadly circular in plan with two ovoid holes running through the centre to attach to traded products. This seal was used by seed growers to trade and identify their goods. One face has an illegible legend that probably reads TRADE MARK, around a raised image of a (probable) turnip. The other face bears the inscription (SEED) GROWER / (COGGE)SHALL / (ESSEX). Although much of the legend is illegible, research suggests that the combination of those letters that are visisble would indicate the seal originated with the King family in Essex. John King set up the business in AD 1793, with his great-grandson taking over the business in the late 19th or early 20th century.

Broad period: MODERN
Period from: POST MEDIEVAL
Period to: MODERN
Date from: Circa AD 1793
Date to: Circa AD 1918