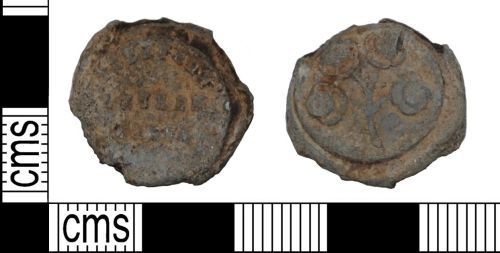 Post Medieval lead or lead alloy alnage bag seal mid 16th to 18th century AD probably Hungarian. The obverse contains lettering but they are difficult to make out. The reverse is decorated with 4 stylised flower roses. One of the many German flour steam mills situated around Budapest but unfortunately the name of the mill is missing. Similar to PAS Unique ID: KENT-76A152. Another seal on the database, SWYOR-639D77, notes that DAMPF MUHLEN A.G. suggests a German steam mill manufacturer - see http://ourpasthistory.com/Gallerya/main.php?g2_itemId=29404 for more details. Alnage seals, cloth seals and bale seals were widely used in Europe between the 13th and 19th centuries as a means of identification and as a component of regulation and quality control. Cloth seals probably originated in the Low Countries in the thirteenth century, and then been started to be used in England in the late fourteenth century. They appear to be the most thoroughly documented type of seal. Cloth seals were typically two disc seals joined by a connecting strip. These were intended to be folded around each side of a textile and stamped closed, in a manner similar to that in which coins were stamped.

Find number: KENT-76A152
Object type: SEAL
Broadperiod: POST MEDIEVAL
A Post Medieval or Modern bag seal. It is circular and has a slot through the seal from edge to edge. One face is stamped with the a now wo…
Workflow: Awaiting validation