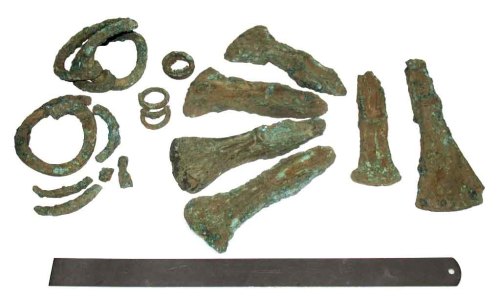 (N.B. On numbering of the palstaves: numbers in square brackets relate to numbering at time of initial recording. The sequence is largely retained for future reference except for where typological considerations take primacy.)

1. Copper alloy Sussex Loop bracelet or armlet. In one piece but broken in two places. Lozengical cross-section. The loop was made from a single, twisted bar with flattened terminals. The metal is heavily corroded on most surfaces and broken in two places. Where the edges of the bar are better preserved, it is possible to identify rows of decorative 'nicks' applied to the corners of the lozenge shaped metal rod.

2. Copper alloy Sussex Loop bracelet or armlet. Fragmentary. Lozengical cross-section. The loop was made from a single, twisted bar with flattened terminals. The loop is broken into six fragments (No. i-vi, below), and, unlike loop No. 1, is no longer held together as one piece. The metal is heavily corroded across most surfaces but is better preserved along short lengths of the bar than loop No. 1. Where the original edges of the bar are preserved, it is possible to identify rows of decorative 'nicks' applied to the corners of the lozenge shaped metal rod (i.e. on two of four edges).

Fragment i.) Large fragment of bracelet

Fragment iv.) Lower arm and terminal of the loop from one of the two arms; Dimensions: Weight: 13g; Length: 55mm

3. Copper alloy coiled finger ring. Fragmentary sub-triangular or 'D'-shaped copper alloy bar coiled in on itself a maximum of three times, with two circuits achieved between the terminals. The ring has broken into three fragments and has heavy green/brown corrosion and flaking to surfaces. Notches or 'nicks' similar to the decoration of the Sussex Loops (Nos. 1-2), and the accompanying finger ring (No. 4), can be identified.

4. Copper alloy coiled finger ring. Complete, sub-triangular or 'D'-shaped, copper alloy bar coiled in on itself a maximum of three times, with two circuits achieved between the terminals. Although there is heavy green/brown corrosion to surfaces, patches of the ring surface are relatively well preserved. Notches of 'nicks' similar to the decoration of the Susex Loops (Nos. 1-2), and the accompanying finger ring (No. 3), can be identified.

5. Copper alloy palstave ['6'] (Rowlands's Class 2, Group 2, side flanged). Prominent medial rib running from the stop ridge to the centre of the blade edge, with a medial rib also present on the butt side of the stop ridge and runs for c.13mm. The palstave has a relatively rounded butt and is heavily corroded, with soil still adhering in places.

7. Copper alloy palstave ['3'] (Rowlands's Class 2, Group 2, side flanged). In two fragments. Prominent medial rib running from the stop ridge to the centre of the blade edge, it is not possible to detect whether a medial rib also occurred on the butt side of the blade due to the extent of corrosion. Heavy corroded.

8. Copper alloy palstave ['4'] (Rowlands's Class 2, Group 2, side flanged). Possible to detect evidence of a medial rib between both stop ridge and blade edge and stop ridge and butt (for c.12mm). Broken and heavily eroded to butt end of the blade.

10. Copper alloy palstave ['2'] (Rowlands's Class 2, Group 2, side flanged). Medial rib from stop ridge to blade edge but not possible to detect a medial rib between stop ridge and butt, probably partly due to heavy erosion in this area of the blade. Cutting blade is distorted and this may be an original feature.

11. Eight pieces of very friable and deteriorated ?prehistoric pottery, possibly from a single vessel and seemingly of the same fabric type. There is a substantial amount of soil adhering to each sherd, serving to hold the friable fabric together in some cases. It is not possible to be confident regarding the original character of the vessel but it has angular white grits.

One additional find was made alongside this hoard:

This item appears not to have been associated with the Middle Bronze Age finds and therefore does not qualify as potential treasure.

As their name suggests, Sussex Loop armlets (or bracelets) are found in the county of Sussex, generally within 16 miles of Brighton (White 1991). The Ockham find is notable for having been found in Surrey and is the first certain find from outwith Sussex, to the author's knowledge. Spiral coiled finger rings are known from Southern England: Roberts (2007, appendix) lists ten examples, with recent additions from the 'Near Lewes' (2011 T192) hoard and the 'Near Wylye' hoard (2012 T786). Palstaves of Class 2 Group 2 are found throughout Southern England, with a strong concentration in the upper Thames (Rowlands 1976, map 4; O'Connor 1980, 52-3; see Discussion in Capper et al. for 2011 T192). Palstaves of Class 3 are rarer than Class 2 examples but have also been found throughout most of southern England, with concentrations in Kent and Hampshire (Rowlands 1976, map 5).

A notable feature of these finds is that eight of the twelve hoards include objects also found with the Ockham hoard: either arm-rings (or bracelets), Sussex Loops or palstaves. The most notable of these overlapping composition hoards are the Hollingbury Hoard, Sussex, which included a palstave, two Sussex Loops and a spiral twisted torc (Roberts 2007, appendix, no. 85; Rowlands 1976, 267), and Stump Bottom, Cissbury, also in Sussex, which comprised two Sussex Loops, three spiral coiled finger rings and several additional ornaments (Roberts 2007, appendix, no. 95; Rowlands 1976, 269). The Ockham hoard therefore shares its composition, as well as a unique armlet/bracelet type, in common with ornament horizon hoards from Sussex.

This case comprises of a find of more than two objects of base metal of prehistoric date (Nos. 1-10, above) and therefore qualifies as Treasure under the Treasure Act (1996), Designation Order (2002). The associated ceramic finds probably from one vessel (No. 11, above) also qualify as Treasure by association with the metalwork as it was probably deposited at the same time as part of a 'hoard' deposit.

Roberts, B. 2007. 'Adorning the living but not the dead: a reassessment of Middle Bronze Age ornaments in Britain', Proceedings of the Prehistoric Society, 73, 135-167

Smith, M.A. 1959. 'Some Somerset hoards and their place in the Bronze age of Southern Britain', Proceedings of the Prehistoric Society, 25, 144-87

Current location of find: Acquired by Guildford Museum
Subsequent action after recording: Acquired by museum after being declared Treasure

Method of discovery: Building work
Current location: Acquired by Guildford Museum
General landuse: Other
Specific landuse: In use as a building