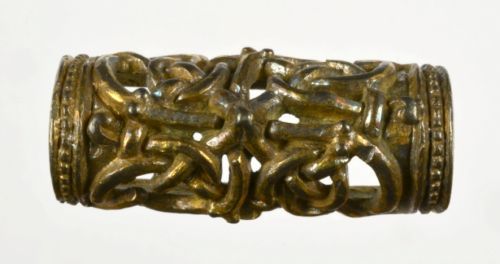 Description: Cast openwork mercury-gilded silver mount, rectangular in shape, with a C-shaped section. Its function is unclear, but it probably covered an edge as a binding. It would have been mounted in position thanks to four small holes at its corners. The rectangular shape is framed by a triple border of two plain mouldings enclosing a beaded one. The design is cruciform, with four long-beaked, snake-like creatures, seen from above, with prominent bulging eyes, converging on a central pyramidal boss formed by the (saltire) intersection of four plain strands. This creates the impression of two superimposed crosses: one made by the snouts of the creatures, the other with its arms at 45 degrees to the beaks, offering a support for the thread-like plain bodies of the snakes to interlace with. The interlace is orderly but not symmetrical, as can be seen in one of the quarters where one of the arms of the strands is discontinuous, thus creating a larger loop in the interlace.

Discussion: The piece does not find obvious comparisons: animals seen from above are common in metalwork from the ninth century (although some are already found on 8th-century coins, with comparable bulging eyes and snouts), but the creatures seen here seem to have more affinities with manuscript ornamentations, as for instance in the Book of Kells, ff. 291v. and 14r see B Meehan, The Book of Kells, London, 1994, figs. 37 and 54). The interlace is more related to Irish work in its fluidity, rather than to the more disciplined Anglo-Saxon or Viking varieties. The beaded framing that encloses the open-work panel is found in metalwork and sculpture, but also as contour to lettering in manuscripts. It is possible that our mount was made to match the art of a related piece of work in a monastic context, and it is best seen as an example of Insular art, probably of the ninth century.

X-ray fluorescence analysis at the British Museum has established the metal to be silver-gilt, with an approximate silver content of 75%. This, and its age qualify the piece as treasure under the stipulations of theTreasure Act 1996, and it therefore should go forward to inquest.