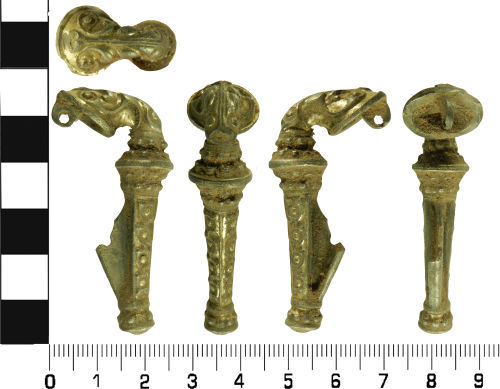 Cast silver trumpet brooch from the Roman period, dating to c. 1st to 2nd centuries AD. The trumpet brooch has a typical oval head shape. The brooch is a hinged example. The hinge and pin are missing. The lug which held the pin remains at the back of the head. The head is decorated with a vertical central ridge divided with three grooves. The ridge expands at the top into a C-shape and at the base into two circles, each containing a pellet. To each side of the central ridge is an inverted S-shaped ridge containing a large pellet in each curve at the top and a pellet where the curve begins. The circumferential border around the head of the brooch is decorated with an undulating ridge.

The recesses between the raised mouldings on the brooch are all gilded. The object is in good condition. Similar examples can be found on p327, Hattatt, (2000). The brooch can be dated from 75-175AD.

This brooch was discovered with a Roman coin hoard, Treasure case 2012 T406. A larger very similar brooch which was part of the hoard is Oakden, V (2012) LVPL-180D95 A ROMAN BROOCH Webpage available at: http://finds.org.uk/database/artefacts/record/id/508627.

This object was found as part of Treasure Case 2012 T406, consisting of 101 Roman silver coins of the denomination known as a denarius (plural denarii ) and 2 copper alloy coins of the denomination known as a sestertius (plural sestertii). The earliest coin in the group is a legionary denarius of Mark Antony (issued c. 32BC-31BC) and the latest a denarius of Commodus dated to AD 190-191. The chronological spread is thus consistent with a hoard of late second century date. Also included in the hoard are 3 Roman trumpet brooches, two rosettes, two silver finger rings and ceramics.

On the balance of probabilities, we conclude that this hoard of constitutes a prima facie case of treasure under the terms of the Treasure Act (1996), by being part of a group of precious metal coins and objects of the same find.