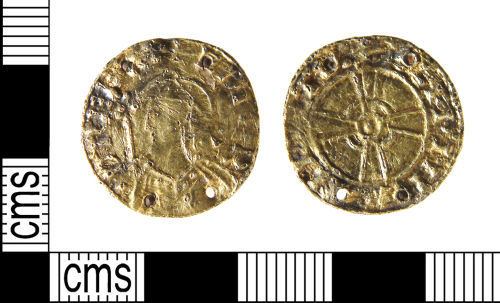 Description: An Anglo-Saxon silver penny of Edward the Confessor (1042-66), Expanding Cross type, Heavy coinage (early 1050s). The coin has been gilded, and pierced four times close to the edge, from the obverse to the reverse. On the obverse, the holes are arranged at 1, 5, 7 and 11 o'clock and three contain an iron rivet. The die axis is 12.
The positioning of the holes suggests that this coin may have been attached to cloth or leather as a dress accessory to display the reverse cross. However, other coins of this type (and of the broader late Anglo-Saxon and early Norman period) are known to have been mounted as brooches/badges. There are various forms of pin attachment, amongst which are a hinged pin and catch-plate, each attached with two rivets. Although there appears to be no impression from such fittings, the similarity to other pieces makes this a likely interpretation. [i] Although a single coin would not normally constitute Treasure, there are numerous precedents of coins showing secondary treatment as ornaments as objects rather than coins, and therefore as potential Treasure under the terms of the Treasure Act (1996).

Dimensions and metal content: The object measures 19.69mm in diameter and weighs 1.89g (29.1 grains). Coins of this period routinely have a high silver content, far in excess of the 10% threshold stipulated by the Act. Although the presence of the iron rivets lowers the overall percentage of silver, they are too small to bring the total silver content below 10%, while the gilding enhances the precious metal content.

Consequently, in terms of age and precious metal content, the object qualifies as Treasure under the stipulations of the Treasure Act (1996).

Subsequent action after recording: Acquired by museum after being declared Treasure

Denomination: Penny
Ruler/issuer: Edward the Confessor
Mint or issue place: Wilton Castle
Category: Coin of the kings of All England 924/5-1066