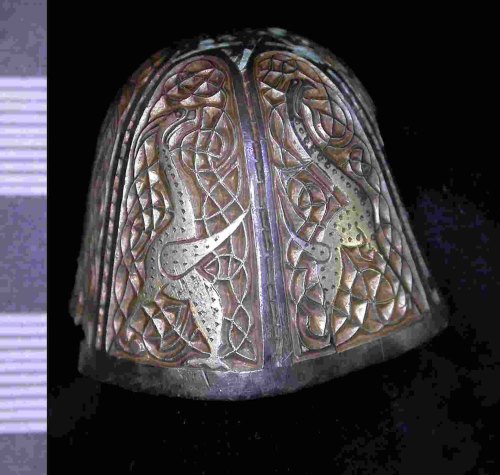 Early-medieval gilded silver object, 26mm high, 29mm wide and weighing 10.39g. The object is in fair condition, but has six small detached fragments accompanying it and some copper alloy corrosion near its apex or crown. The silver is 0.7-0.8mm thick at the edge and becomes thicker towards the crown; it is nearly 0.9mm thick at the highest break.

The object is hollow, rising from a circular base with straight sloping sides and a rounded and flattened top; it resembles a thimble in form. The silver body has an ungilded rim, above which are six gilded panels containing chip-carved interlace around reserved animals. The panels are arranged in three sets of almost-identical pairs. Two pairs have one complete panel each, enabling the ornament to be completely reconstructed, but the third pair are both incomplete. All of the animals have speckled bodies and long necks and are in 'Mercian' style.

The most complete pair of panels has profile animals with pear-shaped speckled wings, well-muscled speckled back legs and long thin front legs. The long neck ends in a small head with a long pointed ear, dot eye, short blunt nose and long jaws, which looks backwards over the wing. It is set within a field of thin spiralling interlace issuing from the ear and ending in a circular terminal under the front foot. These two panels are next to each other.

The second pair of panels, again next to each other, has similar animals, but with curved beaks, no ears, and wings issuing from the haunch rather than the shoulder. The thready interlace is similar to the previous panels, but with no obvious start or finish.

The last pair of panels has beasts seen from above. The heads have dot eyes in oval grooved frames, and grooves across the snouts; they sit on a wide lozengiform body, with a bent foreleg emerging from each side corner and hind legs splayed out from the lower corner. The hind legs have wide speckled thighs, and are splayed out to fill the lower corners of the panel before ending in toed feet.

Each panel is separated by a reserved silver border, with a groove in the centre. The groove is divided into short lengths with 'bridges' to hold a niello inlay, most of which has disappeared; some of the grooves are now filled with green copper corrosion. These grooved and inlaid borders converge at the apex of the object to form a 'Star of David' motif of overlapping triangles. The centre of the star retains faint traces of speckling (tiny punched triangles).

The interior of the object is plain silver with no obvious markings or attachments, apart from a single small circular-sectioned silver loop which is attached near the object's flat base and between the two beasts seen from above. The corresponding area on the opposite side of the object is complete and has no attachment.

There are no obvious areas of wear on the object. Although the centre of the apex appears smooth and a little featureless, it retains its speckling, and there are no other worn areas, even around the loop, although as this is still blocked with soil it is hard to be sure. The rest of the object is very clean and the breaks are all fresh.

The third photo shows an attempt to fit the missing pieces in place; they are all easily placed into their original positions and show that only a small amount is still missing. The finder spent several hours looking for the rest but failed to recover any more of the object.

This object is similar, although slightly smaller, to the three conical mounts from the St Ninian's Isle treasure (Wilson in Small et al. 1973, 60-64, nos. 12-14; Youngs 1989, nos. 99-101). These all had soldered-on baseplates with pairs of rectangular slots, with a beaded wire collar to conceal the join. It is possible that 2011T690 originally had such a soldered-on base-plate, although no trace of this or of a beaded ring is now visible. The small loop on the side of 2011T690 probably served the same function as the transverse tube on the St Ninian's Isle cones, which were thought to perhaps have held thin cords or laces (Bruce-Mitford in O'Dell et al. 1959, 260-1).

The slots in the St Ninian's Isle baseplates are similar to those on the pyramidal scabbard-mounts of the seventh century AD, and the St Ninian's Isle mounts are thought to have had a similar function on some kind of strap, perhaps from a sword-scabbard.The low pyramids of the first half of the seventh century develop into taller pyramids with either square, circular or polygonal bases in the second half of the century (e.g. StH 451 and StH 1166 from the Staffordshire Hoard, and IOW-1855E4 on the Portable Antiquities Scheme's database), and the size and height of the St Ninian's Isle mounts, and 2011T690, may represent a further development in the 8th century (Wilson in Small et al. 1973, 122-3; Bruce-Mitford in O'Dell et al. 1959, 260-1 and note 32). One of the St Ninian's Isle mounts, catalogue no. 13, has chip-carved and engraved decoration, with four fields in a broadly similar style to 2011T690. The speckled animals enmeshed in interlace are similar to those on the central pin in the Witham triple pin set, dating the mount to the 8th century AD, perhaps late in the century.

The object is also similar, but much larger than two objects found in Lincolnshire. A silver gilt 'pomade' from Wrawby and a silver gilt 'cone' from Louth, Leahy, K. The Anglo-saxon kingdom of Lindsey, pp.144, 148.

As the object is made of more than 10% precious metal and is over 300 years old, it constitutes potential Treasure under the Treasure Act 1996.