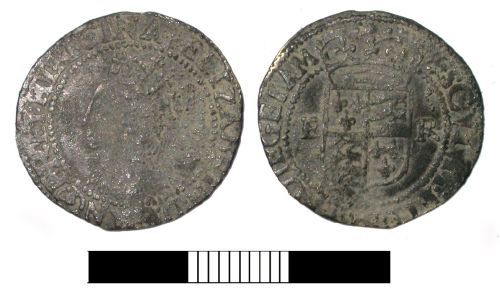 A counterfeit crown of Elizabeth I.

The coin is now dark grey and an original crown is of course gold. It is not clear of which metal this coin is made. There is a hint of yellow metal on one edge.

This probably isn't a modern or Victorian forgery but that is always a possibility. The background for forgery in this period comes from C.E. Challis (1978) "The Tudor Coinage" (Manchester University Press), p. 289-92. It appears that there was a problem with forgery in the Elizabethan period, especially copies of the silver coinage (groats, shillings and half-sovereigns, sometimes pence and halfpence) but copies of gold crowns and foreign coins 'of many kinds' were also well known. Challis suggested that counterfeits made abroad were an especial problem, mostly from France, the Low Countries and (especially problematic) Italy. One example cited was of a Yorkshire merchant who was pardoned for importing counterfeit half sovereigns and crowns manufactured in Rouen and Dieppe. In 1565 there was documented evidence for Flemish counterfeit angels. It seems likely that gold coinage was counterfeited less than silver simply because gold was not used by the normal population but the by the higher clases, with 'accountants' and as a result would have been more easily spotted and stopped. This coin fits into a pattern of forgery in the period.