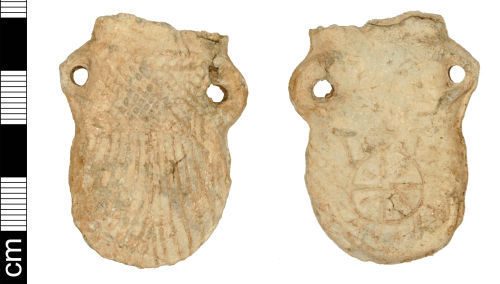 A complete medieval ampulla. The object survives in relatively good condition, though flattened. It has the common 'amphora' shape, with two lugs either side of the neck forming very small handles. One face is decorated with a scallop shell design on the body, with a cross-hatched design above. The scallop shell was an emblem associated with St James the Greater and one that was so popular from the 11th century onwards that it eventually became a generic emblem for the act of pilgrimage itself (Spencer, 1998, 41). Canterbury first adopted the deign as its emblem on earlier ampullae. However, it was later used at a number of other shrines too (Spencer 1998, 41). The other face is decorated with a raised circle devided into four sections with a small dash in each one, surmounted by a cross with two 'V' shapes either side. Spencer (1998, 3) suggests that ampulla were popular in England from the second half of the 12th century until the early 14th century, when they were largely replaced by badges as the most popular type of pilgrimage momento. The metal is greyish-white in colour and slightly pitted. Length:47.4mm, width:36.3mm, thickness:5.5mm Weight:34.5g