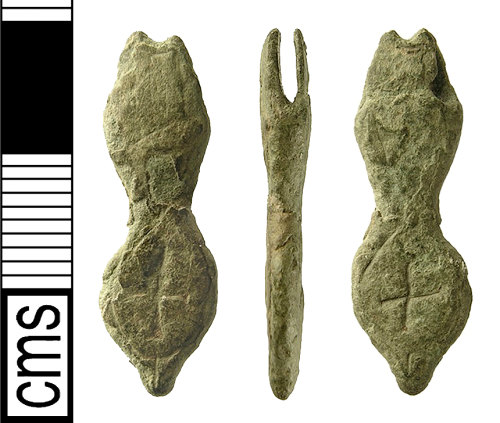 The surviving part of the strap end is symmetrical in plan. The object has sinuous sides that are convex in profile at both ends but concave in the middle, forming a narrowed waist. The attachment end is split to form two leaves (or plates) that would have accommodated a strap or girdle. However, these are both incomplete due to an old transverse break that has occurred mid-way through a rivet hole.

The lower half has a terminal in the form of a pointed knop. The lower part of each face, adjacent to the knop, is decorated with an engraved border line, in the shape of a pointed oval, which encloses an engraved cross. On one face this is a cross pattée and the other appears to be a cross potent, although due to corrosion the style of each cross is difficult to determine.

The piece is corroded but a patina has subsequently formed over the degraded surface on both faces. The patina ranges in colour from light to dark green.

This strap-end belongs to a small group including NARC677, a gilded silver strap end with an H-rune from Long Buckby, Northamptonshire. A description of this Northamptonshire piece (Treasure case no. 2000 T40) is given in the Treasure Annual Report 2000, 32, fig. 40: "A silver strap-end with traces of gilding; it is broken off at both ends, but originally took the form of two flattened spatula ends separated by a narrow ribbed waist. The split end has two incised arcs which seem to represent a highly stylised version of the acanthus leaf often seen on strap-ends of the middle Saxon period, and is framed by an incised line; within the field so defined is a single T-rune. The opposite end has lost any terminating feature it originally had; it has a clear H-rune, and the remains of a possible 'i' rune where the plate is broken away. The back is plain, apart from the ribbing at the waist". It is dated to the 8th century.

Another example, also in silver, can be found at BH-F2CC91 (2011 T400) which has curvilinear relief decoration on one face of the upper half only. The group may be related to Thomas's Class D, which is thought to have a date-range including the 9th and 10th centuries (Thomas 2003,6).

Find number: SUSS-51A3F5
Object type: STRAP END
Broadperiod: EARLY MEDIEVAL
Cast copper-alloy strap-end with a terminal in the shape of the forequarters of a fanged animal, perhaps a wolf. The strap-end is split at on…
Workflow: Published