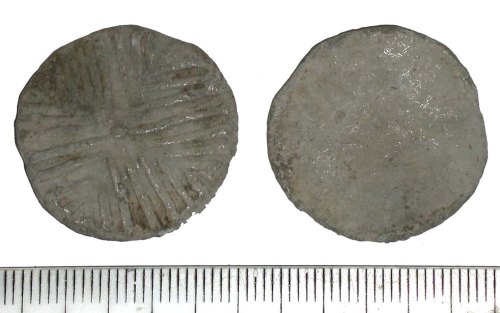 The token is circular in plan and flat in side section. The front of the artefact is decorated four sets of multiple and slightly raised ‘<’ marks pointing inwards to the centre of the token, where a single central pellet is visible. There are approximately three or four ‘<’ markings in each set and are fairly evenly set with an approximate gap of 1mm between each of them. The back of the artefact is flat and undecorated. Overall, the token is in a slightly worn but fair condition.

Similar examples are illustrated in Mitchiner, M & Skinner, A, 1984, 'English Tokens c. 1425 to 1672' in The British Numismatic Journal Volume 54, page 88 & plate 1, ref nos 1-2, which are dated by the authors to the Late Plantagenet period and were produced in London.