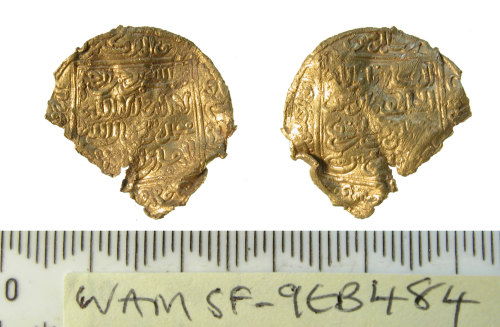 Arabic gold dinar identified by Luke Treadwell. The coin is an Almohad half dinar of Abu Ya'qub Yusuf I (AH 558-80/AD 1163-84), struck in North Africa (the mint is not named) between 1168 and 1184. Abu Ya'qub Yusuf has the title 'amir al-mu'minin' on this coin, which dates it after AH 563/AD 1168. This type is described in Stephen Album's 'A Checklist of Islamic Coins' (no. 483) as 'relatively common', but the find has considerable historical interest of course. Mark Blackburn of the Fitzwilliam Museum has confirmed that the closest parallels to this coin were two gold dinars of Ali b. Yusuf that were reported to have been found in London, near St Paul's Cathedral, around 1879.