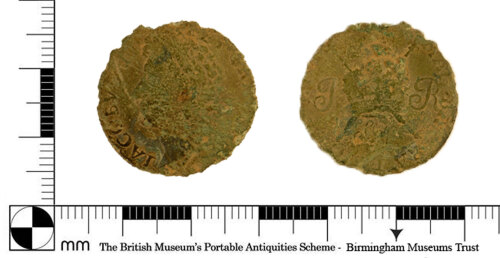 For a comparable example see PAS record SUR-7C47AA. Here, Maslin (2021) states that shilling such as these were part of the emergency coinage issued by James II as he attempted to recover the English throne during the 17th century Williamite-Jacobite war (AD 1689-91). They were made from scrap or 'base' metal (old cannon, bells, etc.) and were intended as place-holders, to be swapped for silver coins of equivalent value upon his victory. Ultimately James' attempt on the throne was unsuccessful, and as such these coins were never exchanged.