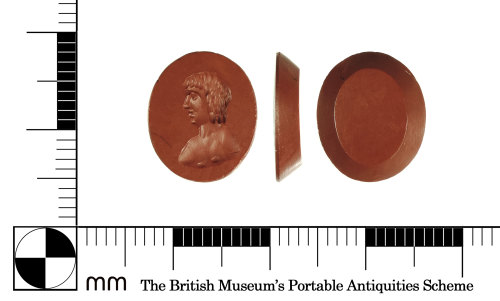 A complete Roman carved red jasper intaglio of a left facing bust of a young man probably Apollo. The stone has been cut into an oval shape and is bevelled the obverse side being wider than the reverse.

Martin Henig per comm writes "This is a lovely gem, a red jasper which I would date from its style to around the very end of the 2nd century AD.  It is a full, nude bust of a youth with his hair bound with a fillet and  long  locks down the name of his neck. These locks suggests it is to be interpreted as a bust of Apollo despite the lack of an attribute such as a laurel as on an earlier full bust version. G.Platz-Horster, Die antiken Gemmen aus Xanten(Bonn 1987),pp.120-121 and Taf,43 no.212. Also seeH.B.Walters, Catalogue of the Engraved Gems and Cameos in the British Museum (British Museum 1926),p.150 and pl. xix no.1321, similar but no laurel.

For the corkscrew form of the locks see Walters no.1317.

You might compare  the style,certainly of the physiognomy  to  a red jasper found at Birdoswald  which shows a bust of a youth ,though the hair here is in a differently style and may actually represent the young Geta (M.Henig ,'Intaglios' in T.Wilmott, Birdoswald. Excavations of a Roman fort on Hadrian's Wall  (English Heritage 1997),284-5 no 87 fig 195,Pl.12.