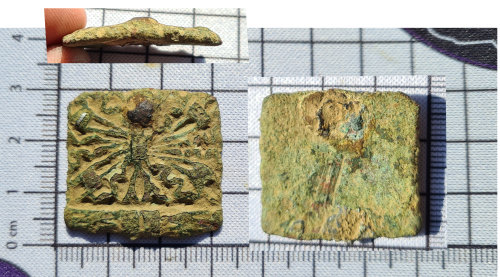 Copper-alloy 9th-century Carolingian-style mount, now worn and perhaps incomplete, with a possibly secondary iron rivet. It is nearly flat, slightly convex on the front and slightly concave on the reverse, and sub-rectangular in shape, measuring 30.1mm long, 28.9mm wide in the centre and 26.5mm wide at each end. It is approximately 4.5mm thick and weighs 13.9g.

It is decorated on the front with cast relief ornament. The design comprises a radiating pattern which fills most of the available space, and a distinct convex strip along one long edge which is separated from the radiating pattern by a groove. It is described with the strip held uppermost.

In the centre of the radiating pattern is a small rectangular boss, set with shorter edges top and bottom, with two vertical grooves on the top. From this, ridges radiate in a repeating pattern. At the top is a pair with forked ends, flanked by a wiggly line to either side. The next element to either side is a pair of straight ridges which run to the corners, interrupted by obliquely set small rectangular bosses. A final wiggly line runs to just above the centre of either short side

When first found and photographed, there appears to have been a small strip of silver inlaid into the centre of one of the rectangular bosses, but on arrival with the finds recording team this was no longer present.

The differently decorated strip along the top has two transversely set rectangular bosses in the centre, each probably with a central vertical groove. To either side of this is a pair of panels with alternately set triangular grooves and ridges.

Mounts DENO-872273 (from the Torksey area) and BH-8F458C (from Little Munden, Herts) are also rectangular with a raised rib or convex moulding along one edge, and DENO-872273 also shares the radial motif in the main panel, Other mounts illustrated by Thomas have a moulding at both short ends with a radial pattern between (Thomas 2012, nos. 11 and 14), and it is possible that the Filby mount may have been similar but is now incomplete. The silver-inlaid rectangular bosses can be paralleled on a copper-alloy strap-end from Colby, Norfolk (NMS-5BAC02; Thomas 2012, no. 20); the decoration on the raised moulding can be paralleled on another, from Ixworth, Suffolk (SF-8724D1; Thomas 2012, no. 23). Thomas dates these objects to the 9th century (2012, 497).