Hello, my name is Lydia Prosser and I have been the Finds Liaison Assistant for North and East Yorkshire for the last eight months. Alas, today marks my final day: how the time has flown! Looking back to the blog post I wrote at the very beginning of my internship, I have learnt a lot; it amazes me now that when I first started I couldn’t tell the difference between copper-alloy and iron! I now have a wide knowledge of material culture spanning 10,000 years and I can be much more discerning. I have enjoyed every minute of this internship. I have been privileged to work in a fantastic museum with some truly wonderful people. The very best thing about this job, however, has to be the objects. I have been introduced to a whole range of object types that I had no idea existed before (chafing dish anyone? Plough pebble? Tenterhook?) as well as many that I now feel I’ve handled a lifetime’s worth of (spindle whorls and pennies of Edward I, for sure). Every day was different in this job and every new tray of finds brought something to be excited about. I couldn’t do a blog post about my internship without highlighting a few of my favourites from the four hundred odd that I have recorded, so here goes.

My absolute favourite has to be this little Anglo-Saxon dog-headed stud (YORYM-92CC79). It was found with another very similar to it and I love it for the detail and the particular sense of character it possesses that you only really get in early medieval art: look closely and you can see little zig-zag teeth! Once an early medievalist, always an early medievalist….

I don’t usually get so excited about post-medieval finds but this sixteenth-century buckle was in perfect condition and the incised decoration is exquisite (YORYM-C3C5FE). Complex objects such as these are difficult to describe and test both the imagination and vocabulary. On the subject of vocabulary, it became clear to me very early on that the PAS database would be much slimmer if the mixture of brown and green that is the invariable colour of copper-alloy after it has been deposited in the ground for hundreds of years was simply described as ‘breen’ or a similarly pithy adjective.  This would surely be revolutionary in object-based disciplines, saving much finger cramp from typing. Incidentally, ‘breen’ is also my hair colour, proving undoubtedly that my career choice was a right one. 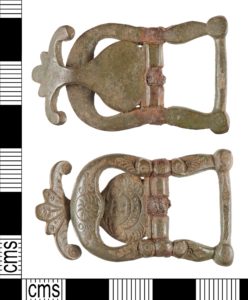 We get a lot of Roman finds in York and so I have to include at least one: this is a Roman stylus, a fairly unusual find. It’s surprisingly large and has faint traces of raised decoration on its surface. The wide flat end would have been used for flattening the wax and the opposite end for writing.

I got to process a number of treasure cases during my time as a Finds Liaison Assistant, including this beautiful silver early medieval strap end (YORYM-7821B5). 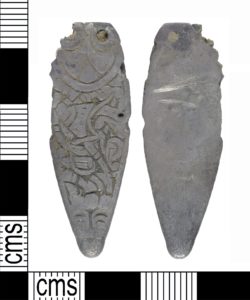 My internship didn’t just involve recording finds, however. I got to meet the finders at Finds Days and metal detecting club meetings and darted all over the country for training and meetings. We spent one day in a ‘coin blitz’ with Roman coins expert Sam Moorhead. I am in awe of Sam’s ability to identify coins that seemed to me to be almost entirely worn away on both sides. Aspirations! In February, I gave a Curator’s Talk at the Yorkshire Museum. I picked seal matrices as the subject of my talk as these are a relatively understudied object type that can provide a huge amount of information about the lives of people in the Middle Ages. They are a very personal object and it is very satisfying to tease out the information from a Latin inscription or small fragment.

Although my contract as a Finds Liaison Assistant is now up, I’ve become hooked and the Portable Antiquities Scheme cannot get rid of me that easily! I am moving on to become Finds Liaison Officer for Lancashire and Cumbria. This role will bring new challenges, new responsibilities and many varied and wonderful finds and people. I can’t wait!