This post is inspired by The Museum of London’s Collecting Covid project which aims to acquire both physical objects and first hand experiences of living in lockdown London.

The Portable Antiquities Scheme West Midlands office is based at Birmingham Museum & Art Gallery and like London, Birmingham has seen empty streets, cafes, trams & trains and of course our museum galleries.

We are not sure at the moment when we will be able to get back to our beloved yellow office, a bright and cheery space at the home of The Staffordshire Hoard, one of the most important collection of Pre-Raphelite paintings in the world and the permanent exhibition of Birmingham, Its people, its history which is where we could imagine our Covid objects being placed in the future.

Our team of volunteers have shared the objects that they would include. We already knew we had a talented group of people volunteering for the Portable Antiquities Scheme in the West Midlands. We now know of their other super musical and crafting talents.

As part of this exciting day of activities organised by BBC Arts I have produced a small presentation about a Roman Polden Hill brooch. We see many of these brooches, discovered by metal detectorists. In fact there are over 3,000 recorded on our database.

In this presentation I discuss a specific example on display at my workplace, Birmingham Museum & Art Gallery. My hope is you will understand a little more about this specific brooch type and come and visit it in Gallery 36 once we are open again.

The large majority of finds recorded by The Portable Antiquities Scheme are discovered by metal detectorists, however we also see artefacts found by members of the public and gardeners. You may recall the object voted number one in the series entitled Britain’s Secret Treasures was a Lower Paleolithic flint handaxe made more than half a million years ago found by a man walking his dog along a beach in Norfolk.

This gold mourning finger ring dating to circa AD 1600 to 1800 is not a hugely unusual find across the country. In fact over one hundred have been reported as treasure across the country under the Treasure Act 1996. Memento Mori finger rings and were popular from 16th to 18th centuries and were made to memorialise the dead but also to keep reminders of one’s own mortality. They are often engraved with skulls and have mottos inscribed within the hoop. This one for example reads: “Live Holy and dye happy“. They may also be inscribed with the initials of the person that has passed along with the date. 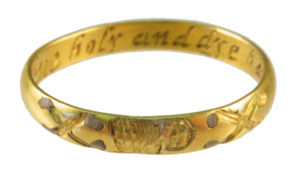 Perhaps slightly unusual is the fact that this ring was discovered in a back garden in Birmingham. You may think if you find something in your back garden that you as the landowner will be entitled to keep it. However this is not the case if a single object is of precious metal such as this finger ring, then it must be declared to the local coroner within 14 days of discovery. The easiest way to do this is to contact your local Finds Liaison Officer (FLO) who will complete all the paperwork on your behalf. They will write to the Treasure Team based at the British museum and the local coroner with the information of the find plus when and where it was found. Your local FLO will photograph your find and then in most cases write the specialist report, this is then used by the coroner to make a decision regarding if the object qualifies to be declared treasure or not. If you are unsure if to declare an object then you can always contact your local FLO, information can be found at www.finds.org.uk on the contact page

If a local museum is interested in acquiring the object and the coroner declares it treasure at inquest that means that the Crown is then formally regarded as the owner of the item. The next phase is that it will then be valued by The Treasure Valuation Committee. Once the interested museum pays the agreed valuation, unless the reward is waivered which is encouraged, then the title is regarded to have transferred from the Crown to that museum.

Besides single objects such as finger rings, brooches and thimbles to name a few; if you discovered two or more coins found together of gold or silver content or 10 or more base metal coins found together which can be dated to over 300 years old then these must also be declared. For all the relevant information regarding the items that constitute treasure see the treasure page at www.finds.org.uk

Finally, although you are not obliged to record non treasure items we are interested to see those other items you may find. The majority of objects we record on the database do date to over 300 years old, however we have recorded other items such as World War One medals that have been lost and have local historical value. In some cases members of the original owners family have been traced and the objects have been returned to the family. So if in doubt regarding the age of your object please get in touch with us.

The Coundon pendant has been dated to circa AD 1450 – 1550. The pendant is named after a small hamlet which was part of the ancient parish of Holy Trinity, Coventry. Records tell us the church had land in Coundon from at least the early 14th century. The Domesday book of AD 1086 records that Coventry Priory also held land in the hamlet at that time. The priory’s lands in Coundon were not administered as a unified demesne estate, and were subsequently easily divided at the time of the Dissolution of the Monasteries between AD 1536 – 1541. We will never know of course the identity of the original owner of this religious object or the circumstances of its loss, however, there is a possibility that it could have belonged to a Prior or a local wealthy landowner. 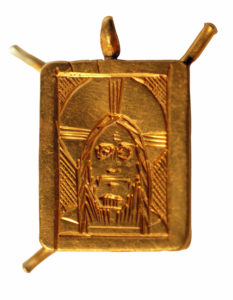 The object has a suspension loop at the top and three remaining pins in the corners that are thought to have once contained pearls which later perished in the ground.

One side is crudely engraved with the head of Christ and the other with a half-length image of Christ as the Man of Sorrows. 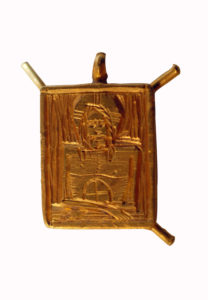 The object was reported to the Portable Antiquities Scheme office based in Birmingham under the stipulations of the Treasure Act 1996. A specialist report was written and metal analysis conducted at the British Museum established the gold content to be 83% gold.

The Coundon Pendant is on permanent display at The Herbert Museum and Art Gallery located in Coventry city centre.