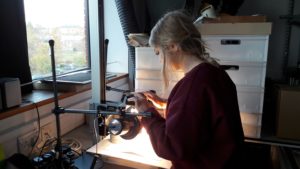 I started my first museum job as Graduate Curator of Natural Sciences at Ludlow Museum Resource Centre just over 11 months ago. I am also in the midst of undertaking an MSc in Museums Practice at University Centre Shrewsbury. As part of this I chose to undertake a project with the Portable Antiquities Scheme (PAS) and consequently began volunteering for the PAS team in Herefordshire and Shropshire. As an Earth scientist, prior to beginning my job with Shropshire Council, I was completely unaware of the existence of PAS. Working with Finds Liaison Officer Peter Reavill and his intern Emily Freeman over the last few months, I have learnt important skills and gained a great deal of appreciation for the way the Portable Antiquities Scheme operates.

My first taste of being a PAS volunteer involved learning to edit and prepare images for upload onto the database using Adobe Photoshop. Peter started me out with some nice easy round coins which were easy to lift off the background, and after a couple of attempts I felt I had a good grasp of the photo editing process. However, not having a background in archaeology, I struggled to working out which way up the coins needed to go and had to pester Peter and Emily a lot. After managing with round things, I graduated to bumpier and mis-shaped coins, and then eventually on to three dimensional objects. Getting the correct layout of the images taken at  each angle for the 3D artefacts, proved to be a little confusing. Luckily Peter has a little model pinned to the noticeboard that I could check against and as before, when all else failed, I beckoned those in the know over for help. 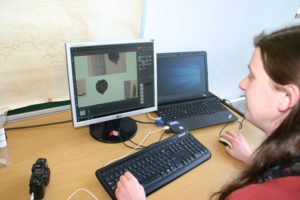 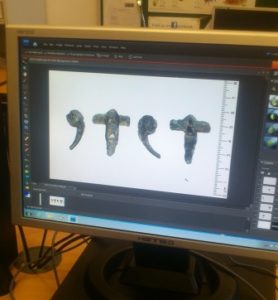 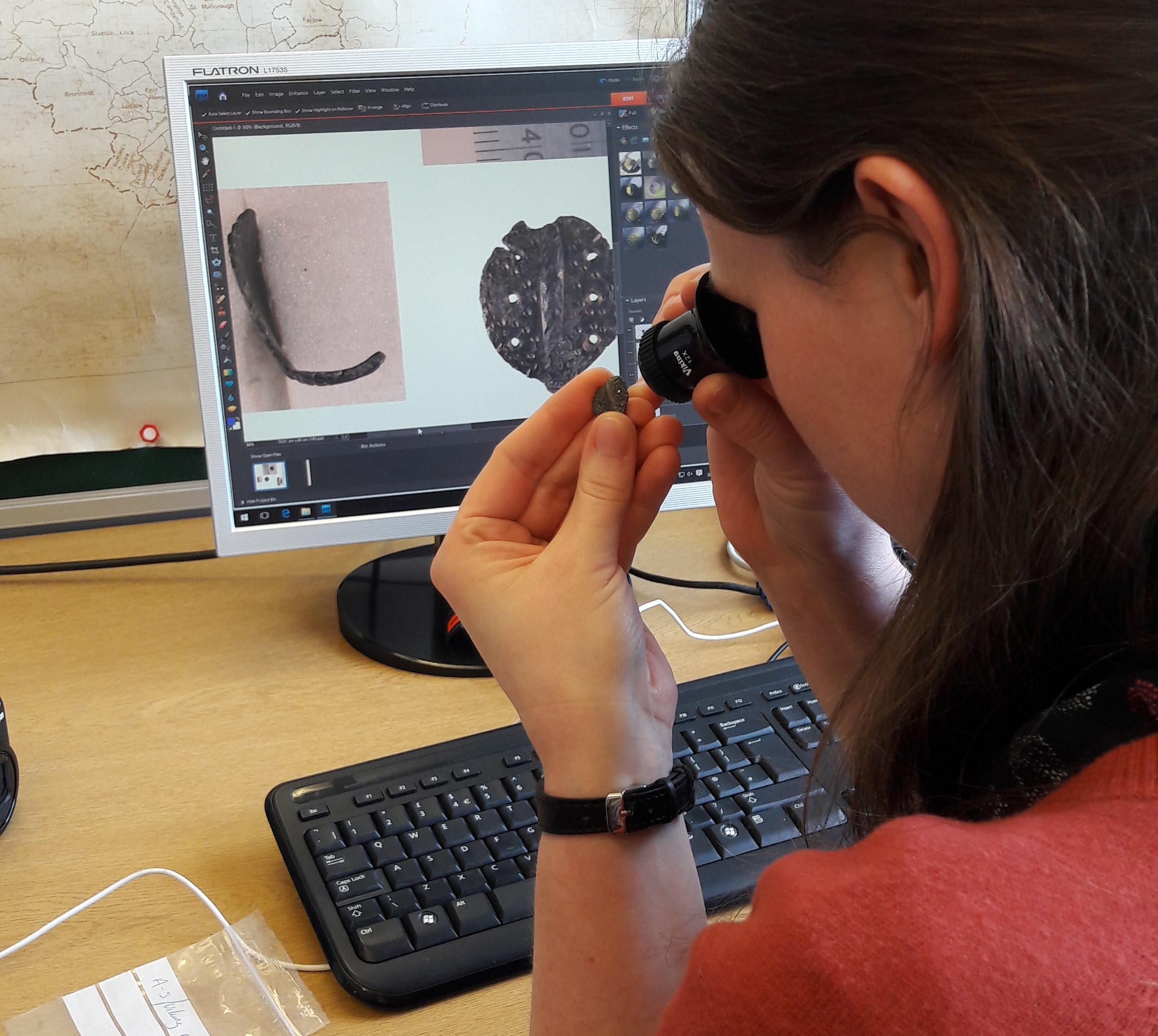 Anyone who has worked with images will tell you that the key to a well Photoshopped image is a good image in the first place and as such it was time for me to learn the art of photographing artefacts. This was a lot more time consuming and complex than I thought it would be. The artefacts are corroded and worn being made of different materials which reflect light in different ways. There were also details that needed to be brought out such as the mint marks on coins.

The photographing process begins with a lighting rig, with two blubs on either side, the camera mounted above, and a glass plate below on which the artefact is placed. Using a tiny spirit level (so cute!…yes, I’m a girl) I had to make sure the camera and the glass plate were flat (or equally slanted). Then begins all the fun and games of adjusting the lights up and down to get the best picture. Sometimes there is too much glare and you have to use your hand to make a little shadow or even get a small mirror in there to reflect more light on to a darker spot. With the 3D objects there is the added battle to get them stood in the correct position to take the photo. This usually involved making holes and wedges in, and building supporting towers of, plastazote foam in which to place or lean the artefact. It’s a lot of effort at first but after a while I started to get into a flow and had techniques that I knew worked. Obviously I still got things wrong and Peter and Emily were on hand to suggest what might work better. At the beginning I kept forgetting that I could fiddle with the exposure on the camera. I was trying far to hard, when I should have been letting the fancy camera do the work. 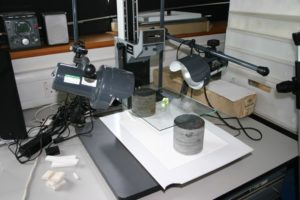 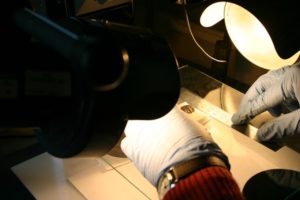 Documenting finds on the PAS database is similar to the way items are accessioned on the museum database – but the categories are obviously much narrower. There is a far greater focus on location / findspots and very clear descriptions of the artefacts so that they can be distinguished from other very similar finds. As an archaeological layman, I have not reached the stage where I am able to identify the artefacts beyond the very simple of, that’s a coin and that’s an annular brooch. However, I did have a brief moment of feeling smug when I correctly recognised a find as a small model cannon.

Being in the early stages of my museum career, volunteering for PAS has proved hugely valuable. Not only has it been fun working alongside passionate volunteers, with varying backgrounds and interests, but it has opened my eyes to archaeology as a subject that I was completely unfamiliar. I have realised the full relationship between PAS and museums, learnt new skills and gained an understanding and appreciations for the role metal detectorists and other finders play in exposing our countries history.

I strongly recommend volunteering for the PAS, whatever your background.