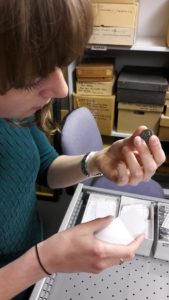 I began as a volunteer with PAS in June 2016 when my role as Documentation Assistant for the Staffordshire Hoard at Birmingham Museums Trust came to an end. My Masters degree, in Museum Studies, focused on artefacts and material culture and I have always wanted to work with archaeological collections; researching amazing finds and learning their stories. I had known of PAS for a long time, having used its database for many of my research projects at University. I also knew that PAS is the perfect place to come into contact with a huge range of artefacts.

Beginning as a volunteer, I was introduced first to Photoshop. I had some familiarity with the programme but had never had the opportunity to explore it fully. Victoria Allnatt, FLO for Staffordshire and West Midlands, showed me the ropes and I was very quickly whizzing through coins and tokens! I have an interest in coins, Roman Imperial ones in particular, which are luckily a common find here in the West Midlands. Victoria made sure to give me plenty to look at and showed me how to identify coins I was less familiar with (Medieval coins are still a bit of a mystery at times…). 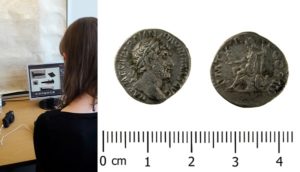 After a few weeks of Photoshopping lots of round things, I was promoted to photographer which, other than the odd holiday snap, I had no experience with. Photographing a dull object (like a token) was not too difficult, as long as the settings were correct and the lights were at the right angles. Taking photos of shiny artefacts, however, proved more of a challenge. It is important to minimise shine and shadow in order for the photograph to visibly show all of the features of the artefact, otherwise, what is the point of having the picture? 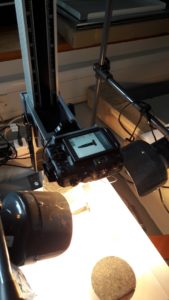 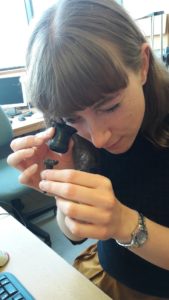 Once I had mastered the photography side, I began writing simple records for the database. Records should be written so that if a person cannot see a picture of the find, they should still be able to visualise it; this was like learning a whole new language and made me question how I worked. Describing the form of the artefact and the shapes, holes and which bit is attached to what bit is incredibly difficult to begin with because the words were not in my vocabulary.

Unfortunately, working with Victoria (and eventually Teresa Gilmore) didn’t last longer than five months….. because, I became the Headley Trust intern for the West Midlands!

I relocated to Ludlow in December 2016 and to hear more about my experience as an intern, check out my second post!