A new exhibition of PAS finds from Nottinghamshire has just gone on display at the University of Nottingham Museum. The exhibition showcases a range of objects from across the county and demonstrates the public’s contribution to our understanding of Nottinghamshire’s past. The objects include Treasure items that have been acquired by local museums, as well as ancient coins, jewellery, weapons and tools that have been borrowed from finders.

Among the fascinating and exquisite objects on display is an Anglo-Saxon sword mount in the shape boar’s head (DENO-92C3BB), which is made from gold and garnets. There is also a recent metal detecting find of a hoard of ecclesiastical objects (DENO-2FE6CD), which includes fragments from an enamelled Limoges cross.

The University of Nottingham Museum is an important partner for the PAS in the region. The Finds Liaison Officer holds a finds surgery at the Museum on the third Tuesday of each month. The FLO is also supported by a team of university students who meet twice a month at the Museum to record artefacts onto the PAS database. Many of the objects on display have been recorded by these volunteers.

The exhibition will be on display until 27th January 2019, at the University of Nottingham Museum, Nottingham Lakeside Arts, University Park, Nottingham, NG7 2RD. Open Tuesday – Saturday 11 am – 5 pm and Sunday 12 noon – 4 pm. Closed on Mondays.

Alastair Willis’ new book ’50 Finds from Nottinghamshire and Derbyshire: Objects from the Portable Antiquities Scheme’ has just been published. The book demonstrates the region’s importance within the country and its links with the outside world. It includes some of the most spectacular finds from the two counties, including the famous Newark Torc and the Ashbourne Hoard, but also some less well-known objects that are just as important for our understanding of the past. Many of these objects are on display in local and national museums. The book is available in local museum shops, from Amberley Publishing or from Alastair at PAS events. 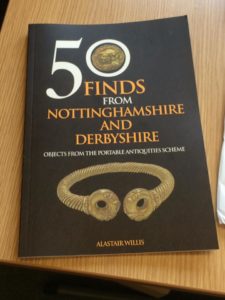 Tell us about yourself.

I have been the Finds Liaison Officer for Derbyshire and Nottinghamshire since May 2015. I started out as a PAS volunteer in Wiltshire before getting two Headley Trust funded PAS internships, firstly in Wiltshire and Hampshire, and then in Lincolnshire. I also volunteered in the Department of Coins and Medals at the British Museum.

What does your role involve?

As FLO, I am responsible for identifying and recording archaeological objects found by members of the public in Derbyshire and Nottinghamshire. I also visit metal detecting club meetings, attend finds days and other outreach events at museums, and deal with Treasure finds.

What area of history/archaeology are you most interested in?

I studied Ancient History and Archaeology at University and then did a Master’s degree in Egyptology, so my specialism used to be the relations between Egypt and the Aegean in the Late Bronze Age, Having moved into British archaeology, I am most interested in the Roman period, particularly Roman coins, but I really enjoy seeing objects from other periods as well, especially the Iron Age.

Why did you start working for the PAS?

The PAS really attracted me because FLOs and volunteers get the opportunity to see and handle objects from all periods of human history. The PAS’s goal to record objects found by members of the public and make them accessible to both researchers and the public really appealed to me. I think the preservation of our heritage is hugely important and requires the cooperation between many different parties including archaeologists, museums, metal detectorists, landowners and other members of the public.

What do you enjoy most about working for the PAS?

I get to work with and learn about such a wide range of objects, many of which have only just been discovered.

What is the most exciting find from Nottinghamshire you have recorded so far?

This piece of Iron Age dagger hilt (DENO-B364C6) is a very unusual and exciting find. The ‘plastic style’ decoration on it is more common on the continent and no other swords or daggers quite like it have been discovered in Britain.

What is your favourite find from Nottinghamshire that has been recorded on the PAS database and why?

The Newark Torc (DENO-4B33B7) is probably the most famous and spectacular find from Nottinghamshire. It is made from electrum (an alloy of gold and silver) and would have been worn around the neck of a very wealthy and important individual. It is nearly identical to one found in Norfolk and is thought to have been made by the same craftsman.