Having realised that we had a large and internationally important assemblage, we wanted to get it published. Because it was not a priority for the Battlefield Survey, I took up the baton (excuse the pun!). After discussing with colleagues it was agreed that the PAS database was a good place to record the site, as it would be easily accessible to all. So I started work recording the 1000+ objects.

To help with this mammoth task I recruited archaeology students from Leicester University and we set about adding each object, whilst colleagues and an intern at the British Museum did a lot of the coins. After much hard work by all involved, we now have most of the material listed.

If you want to look at the assemblage,   go to the database and enter  – knownas:Bosworth into the ‘perform a basic search’  field at the top of the screen. 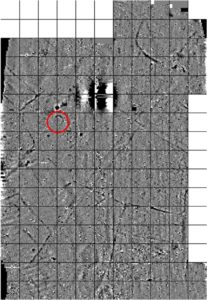 Because these objects were found under survey conditions, we had very accurate locations for them. It was obvious they were found in a tight scatter, especially the coins and horse and rider brooches, so we started looking at other survey work in the area. The whole site had been geo-physically surveyed and when the finds were plotted over this, they seemed to focus over a round buried feature in a very busy landscape (more in the last blog).