Some of our deposits could be associated with a god favoured by the military, especially the horse and rider plate brooches we were finding in large numbers. Before the survey started, we had 6 of these, already significant as the largest assemblage ever found was 8. 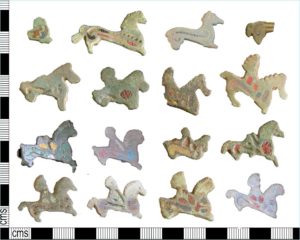 By 2009 we had 73 ‘horse and rider’ brooches and many plate brooches, including rabbits, ducks, a dog and a raptor. By the time the survey team finally stopped looking in the ‘Roman field’ we had an amazing and unbelievable total of 101 ‘horse and rider’ brooches.  I had been getting regular updates from the team as this total went up and we had been joking about getting to  ‘Dalmatian’ numbers, so it’s very weird that this is the final total. 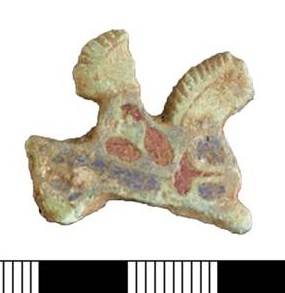 Having so many from one site makes it an internationally significant assemblage. Along with the other animal plate brooches, horses are thought to be associated with the Roman god Mars.  He is the god of war and so was especially important to soldiers. It is thought that the ‘rider’ on the brooch may be a messenger,  in some forms of the brooch the rider is also holding a ‘baton’ or scroll (see image right), so it would make sense that these brooches are perhaps sending messages directly to the god.