Along with the coins (part 2) another major part of the assemblage was a really interesting collection of brooches. In total 216 brooches were recovered. During the survey I arranged an open day to view what we’d found. This included local interest groups, councillors and finds specialists as we needed some expert advice.

One of the experts was Dr Justine Bayley, a metalwork specialist. She had a good look at the brooches and came up with some interesting info. The range of brooches was unusually narrow, we had 74 bow brooches, 118 zoomorphic and 24 disc brooches. Many of the bow and disc brooches were gilded which, amongst other features, Dr Bayley said suggested a military connection. This was interesting, as a Roman road ran very close to our field, in fact Richard III (sorry I had to mention him) made use of it to march into battle. 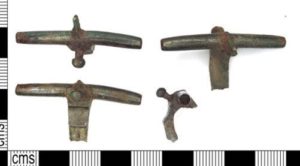 The road runs from the Roman fort at Mancetter into Leicester, so it made sense that our site, about half way along, was a ‘pit stop’.  It also added weight to the theory our site was a temple, as the deposits could be associated with a god favoured by the military (more in later blog).  Finally we also had a few artefacts that could be classed as military (see images below), so the military link seemed to be confirmed. 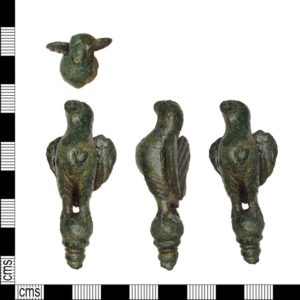 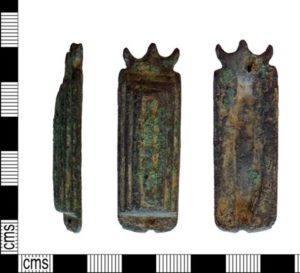