These objects are amongst my favourite things to record and are very interesting for several reasons. Firstly, a pair of stirrup mounts such as these, LEIC-8C54F0 and LEIC-8D1AC0,  are extremely rare finds. We only know of one other probable pair, BERK-2339E4 and BERK-230A90. It’s very difficult to accidently lose a pair of these mounts in the same location, so they may be a site loss or may even indicate a burial. 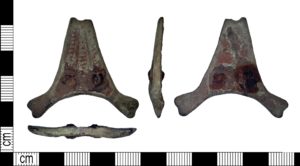 Secondly, this new pair are of a rare type (Williams class A, type 8 variant) with a triangular form and very angular decoration. Two similar ones are featured in David Williams’ book,  ‘Late Saxon Stirrup Strap Mounts’, One from Wooton Warwen, Warwickshire and one from Brewood, Staffordshire. Before the pair were found I had recorded one very similar example from  Melton, Leicestershire (LEIC-AF8883 ).

A quick search on the database revealed a small cluster of similar mounts, all found in the Midlands, except for (LVPL2270) from Cheshire  and a very worn example from  Southwold ( SF-5883A1). One from North Warwickshire (WMID-8EF778) has the same shape and raised border as the pair, but its projections have three bulges, perhaps an attempt at an animal head?  Others do have clear animal heads, with no sign of geometric panels.  One of these is from Bottesford, Leics. ( LIN-CED111) with foliate decoration and is very similar to one from Swineshead, Lincs (LANCUM-70FE8E). There is even one from the aptly named village of Styrrup, North Nottinghamshire (SWYOR-918CD4).

Finally, finds like these highlight the importance of accurate grid references. I was provided with a 10fig ref. so I know they were found about 150m apart. Without that detail it would be hard to argue the mounts were a pair. Also because of the good practice of other finders, I know they were found in a large scatter of early Medieval and Medieval material.

This includes a good collection of spindle whorls of a form thought to date to the later early medieval period (700-1100AD). Very close to the mounts was a penny of William the Conqueror (LEIC-40F5AD) and a probable early medieval mount (LEIC-A19EA9). To the south we have an interesting 11th C. silver brooch (see Names from the Past) with a runic inscription.

The area has a good scatter of medieval finds, including coins dating to 12th – 14th centuries. This assemblage is very informative when placed in the landscape. To the north of the scatter we have the medieval (14thC) church of St Mary Magdalene, which has a Norman font, hinting at an earlier church. This is now stranded in fields to the south of its village, where another stirrup mount was found (LEIC-C97582).

This scatter of early medieval material could suggest an early manor site or that the origins of the village lie in the 9th or 10th Century (it is listed in Domesday as ‘Pechintone’ – 4 households). It could also indicate that it’s a shrunken medieval village or that focus of settlement has moved north.

Recording finds with accurate locations allows us to map past activity and in many cases, to interpret the scatters that build up. In some cases these scatters reveal new sites, in others they add a very useful layer of knowledge to the archaeology of any area.

One thought on “A pair of stirrup strap mounts!”