Hello! I’m Sophie Flynn, the new Essex FLO. To celebrate the 20th birthday of the Treasure Act, this July I’m going to be hopping across the county from museum to museum to hold a series of fun-filled, educational Finds Days (with a particular focus on the shinier objects we like to call TREASURE!)

In this post I will tell you where and when I’m going to be stopping on the Treasure Tour, as well as highlighting some of the lovely Treasure items that are taken care of by the museums I’ll be visiting.

Join me at Saffron Walden Museum in Uttlesford on Thursday 27th July from 11am to 4pm. I will be in the Ages of Man gallery, next to the Treasure Case, in which the museum will be exhibiting some of its most exciting Treasure finds!

Saffron Walden Museum has been acquiring Treasure finds steadily over the last 20 years. Without their commitment to purchasing and caring for these wonderful objects, and without the support of local interest groups who help to acquire items, people from all over Essex and further afield would not be able to enjoy these artefacts and their unique stories. Here are a couple of the items acquired by or donated to Saffron Walden Museum:

The ring was found by a metal-detectorist near Thaxted in 2013 and reported under the Treasure Act (1996). It was purchased in 2015 for the museum’s archaeology collections by Saffron Walden Museum Society Ltd, with the assistance of the Arts Council England / Victoria and Albert Museum Purchase Grant Fund and the Headley Trust. You can see the ring on display in the Treasure case, in the Ages of Man gallery.

This fragment of a silver strap end was found in the region of High Easter in 2011 by a metal detectorist. The strap end, though fragmentary, shows the high degree of Anglo-Saxon workmanship in artefacts of this age. The item was inlaid with gold and the engraving patterns decorated with niello – a mixture of lead, copper and silver sulphides used to finish engraved metal. The item was kindly donated to the museum by the finder and landowner.

I will be at Chelmsford Museum on Saturday 29th July from 11am to 4p. I’ve been able to attend this Finds Day as part of Chelmsford’s ‘Day of Archaeology, in association with Heritage Writtle, and look forward to taking part in the festivities!

Chelmsford Museum has long been an important regional hub for finds acquired through the Treasure process. In its collections are many wonderful items from around central Essex that are incredibly important to our understanding of the archaeology of the region. Many of these items are also artefacts of Treasure! Below are some Treasure items from the database that Chelmsford Museum have recently acquired:

This Anglo-Saxon (c. 8th century) silver hooked tag would have adorned the clothing or garments of a relatively wealthy individual! The design is engraved and inlaid with niello. Though the artefact is now tarnished, it still shows up some of the shiny gleam that it undoubtedly had once upon a time. Hooked tags like this are quite common finds in Essex. We have many records like this on the database. However, much of the time, these items are broken or fragmentary, and are more often than not, made of copper alloy. When a museum is able to acquire a complete example, it gives many people who are interested in researching such items a great resource to learn about them.

A beautiful example of a 1st-2nd century AD Roman zoomporhic brooch. This one takes the fo

rm of a leaping dolphin, and was gilded all over. Now much of the gilding is missing, but you can still see that it would have been a spectacular brooch when made.

Dolphins were a common theme in the work of Roman craftspeople. They represented good luck for sea-faring folk and became a central symbol for much of the decorative jewellery work of Roman Britain.

I will be attending Colchester Castle Museum’s ‘Archaeology Day’ on Tuesday 25th July from 11am to 4pm. There will be many fun activities for archaeology enthusiasts and families alike!

Colchester has collected lots of incredible Treasure finds over the years. I have created a special Castle Treasure Tour to highlight a few stand-out pieces. If you are in Colchester, take a stroll around the atmospheric Norman castle and go looking for real Treasure! On the Finds Day, learn all about these items and many more through the talks on Essex Treasure finds, and get your hands on some archaeological artefacts from our handling collection.

Some of Colchester’s finest Treasures: 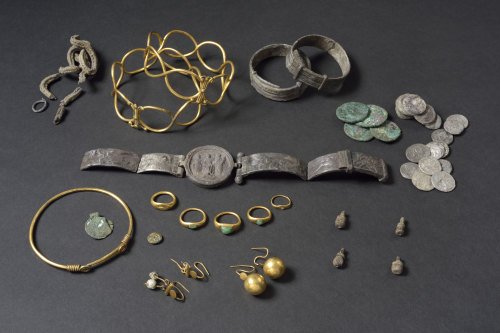 Though this hoard of jewellery and coins was never declared ‘Treasure’ by the Coroner, as it was kindly donated to the museum by Fenwick before the point of Inquest, it is regarded as a great example of what a Treasure ‘hoard’ is. Found in 2014 by Colchester Archaeological Group whilst digging in the vicinity of the Fenwicks department store on Colchester High Street, this Treasure hoard would eventually tell a rather poignant story.  It was purposefully buried by a Roman family in the floor of a house that was to be ransacked and burned during the Boudican revolt of AD 60/61. Their haste was obvious given that the ditch the hoard was found in was shallow. The family (or individual) had likely been confronted with the terrible prospect of losing their home and even their life, and quickly raced to hide their valuables wherever they could.

This golden sword pommel is a wonderful example of Early Medieval craftsmanship, and dates to the 7th century. The surfaces are decorated with fine gold filigree wire and form intricate patterns reminiscent of contemporary Scandinavian design. The pommel is a high status type known from areas in Eastern Scandinavia, Kent and the East of England. This type of design is known as a ‘cocked-hat’ pommel.

This decorative pendant was found in Mountnessing, Essex, in 2006. It was found by a detectorist who had come across one of the most complete and beautiful items of historic jewellery ever found in Essex! It is diamond shaped and set with precious stones. The back is engraved and inlaid with beautifully coloured enamel. Pendants like this date to the Post-Medieval period (post 1500) and were probably worn on items of clothing, being attached to ribbons with other precious items like pearls hanging from them. They were not necessarily made to be work around the neck like pendants today. In fact, the famous ‘Armada’ portrait of Queen Elizabeth I shows the monarch’s clothes bedecked with very similar pendants to that of the Mountnessing type. It is clear that this was once the property of a well-to-do individual. Truly fit for a queen!

For more on Colchester’s Treasures, please speak to the FLO about the Castle Treasure Trail!

I hope you can join us at one of our Treasure Tour events! If you have any questions, call me on 01206506961. Looking forward to a summer season of Treasure!