The Acton Hoard was found at Acton, near Nantwich, in December 2014 by a local metal detectorist during a rally. It is a lovely little group of five silver denarii deposited within a lead cone shaped container with a lead disc stopper. The coins are all of the Roman emperor Septimius Severus, dated AD 194–8. The hoard is Treasure Case 2014 T966 and is recorded on the PAS website as LVPL-15E376.

The coins were all sitting within the lead container which was closed up using the lead alloy disc when they were discovered. Once the disc/stopper was removed the coins were discovered in fantastic condition. The container had not only protected the coins from abrasion which usually occurs when objects move around in the plough soil but the lead alloy container also prevented the silver coins from deteriorating due to a chemical reaction which occurs between silver and lead.

The container appears to have been made especially to hold the coins and this unusual method of concealment suggests that the hoard was deposited ritually rather than as a small pot of money that it was intended to recover. The hoard has been declared Treasure and was selected to go on display at the British Museum as part of the exhibition Hoards the hidden history of ancient Britain. The exhibition is free and runs until 22 May 2016. The Acton Hoard has been acquired by Nantwich Museum and will be returned to Cheshire following the exhibition.

One of the most exciting finds from Cheshire in 2015 comes from the parish of Buerton. It is this fantastic wooden sundial found with a lovely hoard of silver coins of Elizabeth I and one of Mary. 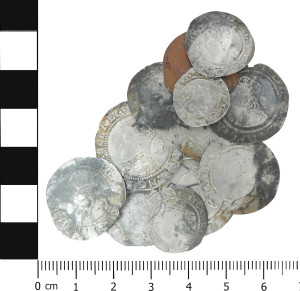 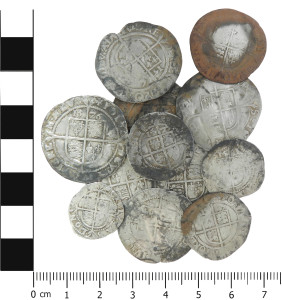 The hoard consists of one silver groat of Mary, (1553-1554) and eleven silver coins of Elizabeth I, (1558-1603). These include three sixpence, four groats, three threepences and one halfgroat and fragments of wood. The coins themselves are a great find but the finder did a fantastic job in spotting this tiny bit of wood and bringing it in. At first we thought it was just a tree root so imagine our excitement when we realised it is a rare sundial probably made in Nuremburg. 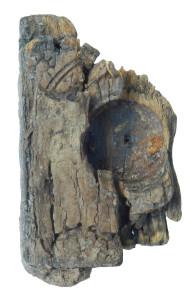 The three fragments of wood when placed together form a sub-rectangular object. In the centre is a carved circular pit with a central hole for a pin and the walls are stepped to accommodate a brass ring and then a sheet of glass. Between the two halves at the break below the pit is a possible circular pin hole. This would have tethered the string gnomon which also attached to the raised lid and cast the shadow which allowed the user to tell the time. Radiating engraved lines would have held the magnetic compass. A double circular engraved border around the central recess, is divided by diagonal grooves, which form the hour lines, six of which are visible. The Roman numerals IX and X are visible just above 9.00 and 10.00 of the dial. Above and to the left of the X is an engraved small circular sun formed of eight radiating lines representing the sun’s rays projecting from the central circle. 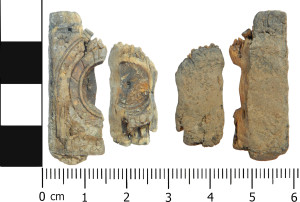 The full record can be found at LVPL-08F250. A fantastic find which could have so easily been missed.