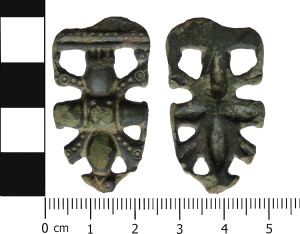 Today I was visiting the Grosvenor Museum in Chester where I hold finds day on the second Friday of each month.

My day started well with a queue of three visitors as soon as the doors were open. The first finder was a local metal detectorist who frequently records his finds on the PAS database. His grandson had found a Post-Medieval signet seal ring combined with a pipe tamper, similar to this example LVPL-A563A1. After writing out a receipt for the object the finder left and was followed by a local field walker who had brought me a bag of stones. Although they ‘fitted in his hand’ the stones had not been worked and upon further investigation I discovered they had been found near a river which explained the amount of wear. It was a relief not to have to carry them all away with me!

A couple more visitors came and went with small objects to add to our knowledge of the local area. Next came a detectorist who I had not seen in a while. He showed me an object which his wife had found a number of years ago. This had been recorded by my colleague as a Post-Medieval drawer handle as it has very similar qualities. The record can be found here LANCUM-2D85A8.

The finder then explained he had just gone back to the same field and found a long curving pin which he took out. After having a ‘Eureka’ moment he had realised that his pin was the same greyish green patina as his wife’s object and asked her to dig it out of their box of unidentified finds. It was a perfect match and a Post-Medieval drawer handle suddenly turned into an Iron Age pin! The pin is similar to the swan necked type which date from 300BC to AD50. He also brought a lovely thumb-nail scraper and a 14th century seal matrix for me to record.

Following these exciting finds there was a bit of a break between visitors allowing me to catch up on Photoshop, the less exciting side of my role. My last visitors of the day was a married couple who detect locally and are keen to record their finds. Having showed me a group of interesting finds the previous month, I had asked them if they would allow me to display their finds in the new PAS case which will be in the Museum of Liverpool from next month. They were happy to loan their objects to us for six months and had brought them in along with a couple of new discoveries. They have found a number of Early Medieval finds including this lovely strap end LVPL-D1295B and this Early Medieval buckle LVPL-BFBC1E 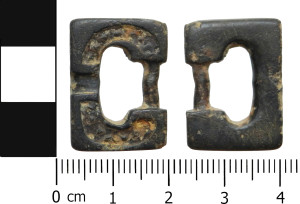 Both of these objects are unusual finds for the Cheshire area where we don’t see many Early Medieval objects. However these new records are starting to show interesting patterns of activity.