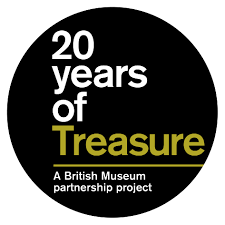 On this day 20 years ago the 1996 Treasure Act came into force. This important Act allows museums across the country to acquire Treasure items for their collection, curating them and protecting them for the nation.

In Cheshire we have been lucky enough to have excavated four Roman coin hoards since 2012, thanks to the finders reporting their Treasure finds before taking them out of the ground. This has allowed archaeologists to gain as much information possible from the discoveries of these hoards, advancing our archaeological knowledge. Each of these hoards contain different denominations of Roman coins, denarius in the Knutsford hoard, radiates in the Peover hoard, nummi in the Poole hoard and siliquae in the Dutton hoard, giving us a fantastic insight into Cheshire’s economy during the Roman period.

However the Treasure Act does not just accommodate these exciting coin hoards, small objects, easily lost are also covered by the Act. Objects such as this stunning silver Roman pendant now in Chester’s Grosvenor Museum, or this interesting post-Medieval silver object used both as a toothpick and an earscoop now in Congleton Museum, have also been acquired thanks to the Treasure Act.

Although the Treasure Act is a hugely important part of protecting our shared heritage, the vast number of non-Treasure objects voluntarily recorded with the Portable Antiquities Scheme (PAS) allows us to learn about those who often play a silent role in history. People who couldn’t afford fantastic silver dress hooks such as this one now in the Grosvenor Museum and would have made do with copper or lead clothing fasteners instead such as this lead example discovered outside of Cheshire. By recording these non-Treasure objects voluntarily as well as the Treasure finds required to be reported by law, we can discover a more complete picture of Cheshire’s past. Currently 6,580 objects both Treasure and non-Treasure, found in Cheshire, have been recorded on the PAS database. All of which can be used in research to advance our archaeological knowledge.